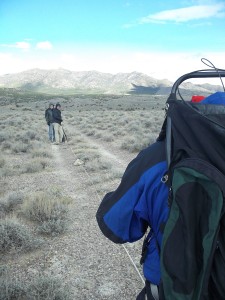 Weather was very in climatic one days.  Winds reached 80 mph and we had to stop field work because the equipment would not work and kept blowing over. I80, north of our site was closed due to wind gusts causing semi trucks to get blown off the road.

A thin veneer of grass fortifies the largest dune field in the Western Hemisphere against the strident winds of the Great Plains.  Last active during the Medieval Era, when European Knights leveled lances, the formation of the Sand Hills likely stretches back two and a half millions years into the Pleistocene Epoch, the dominion of mammoths, cave bears and dire wolves.  The dunes, stretching over 60,000 square kilometer, emerge from the flat Nebraska plains like boundless, rolling waves from a placid ocean.  Our field trip began in late April after the Geologic Society of America-North Central 2014 meeting in Lincoln, Nebraska and took us west then north into the core of the Sand Hills. 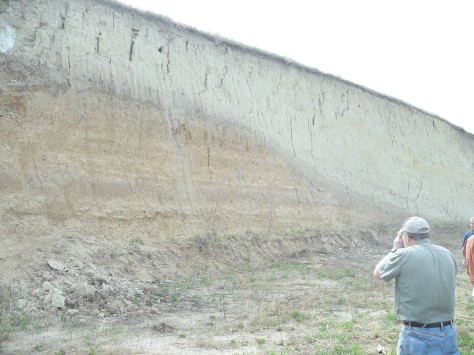 A fringe of loess (windblown silt) greets discoverers to the Sand Hills.  A road cut along US 281, just north of the North Loup River, reveals a glimpse into history.  The lower red-orange unit was deposited during an earlier ice age.  The thin, light grey unit represents a period of soil development and was deposited between ice ages.  The tan, upper unit, the Peoria Loess, was deposited during the most recent ice age.  Each period of loess depositions represents period’s active dune fields in the Sand Hills, while intervening soil layers developed when the Sand Hills were stabilized by vegetation. 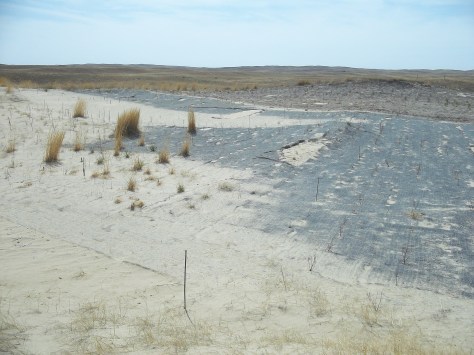 These dunes were reactivated by University of Lincoln researchers in hopes of better understand the formation and evolution of the Sand Hills.  Initiating dune movement proved difficult because even after plant die off, roots continue to hold the sand in place.  It took five years for dune activation to occur when just the vegetation was killed, however, after only two years dune movement was observed with vegetation removal and tillage.  The current goal of the ten year old experiment is to restabalize the dunes.  One dune has been left active, as a control, while the adjacent dune has been replanted and covered with a hay mesh to help hold the dune together.

Outcrops are often the best way to dissect the internal stratigraphy (layering) of sediment.  This large, approximately eighty meter high outcrop was exposed through the erosion of the dune field by the Middle Loup River.  Lower layers form a steep, near vertical cliff face because the  layers were deposited in a lake bottom and are better cemented then the upper, loosely consolidated sand dune deposits.  The upper deposits are comprised of sand with thin clay, silt layers.  Bison tracks preserved in the thin clay layers provide record of the historic animals that roamed the Sand Hills. 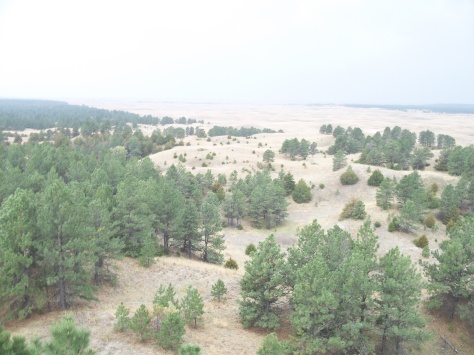 The Nebraska National Forest was planted in the early twentieth century by entrepreneurial botanist Charles E. Bessey to provide timber for the growing country.  While the manmade forest continues to survive, there is little natural rejuvenation.  The fire tower at its heart provides excellent views of the rolling dunes.

I was able to tag along with Dr Jol’s Geomorph class last Friday to see some amazing laboratories supported by the University of Minnesota.  Our first stop was the St Anthony Falls Laboratory.  The lab uses the power of the Mississippi River to run a variety of fluid modeling experiments. 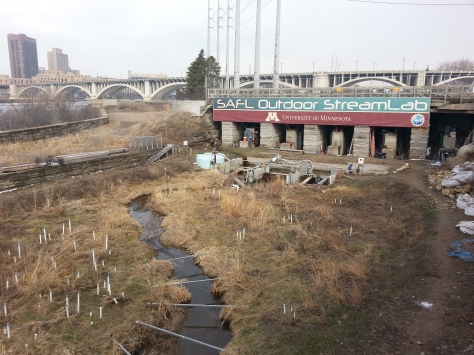 Our first stop was the outdoor streamlab where an small scale, controlled streamed is used to model how streams work in exposed to natural atmospheric forces.

This table had recently been used to model a braided stream pattern.  A variety of materials, including fine grain sands and walnut shells are used to model how real world sands and clays interact to form different stream and delta patterns.

This is a cross-section produced from modeling a deltaic environment.  Cross-sections may be easily produced by cutting large scale models and removing the sediment with a large roll of sticky-tape.

Our next stop was at the LacCore facility, which specializes in analyzing lake cores. 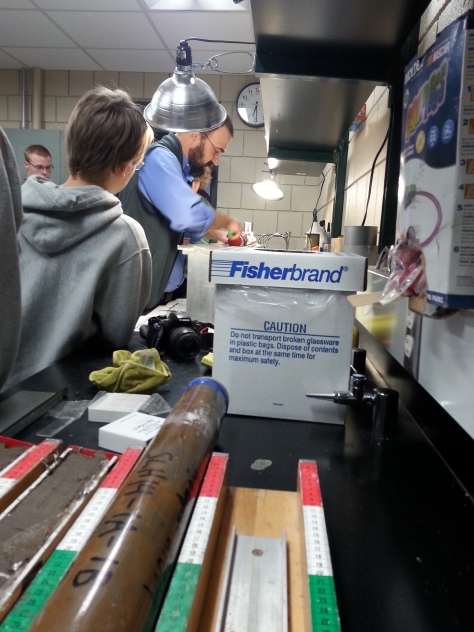 Here’s a picture of a core being openned by a team of researchers from UW-Superior. 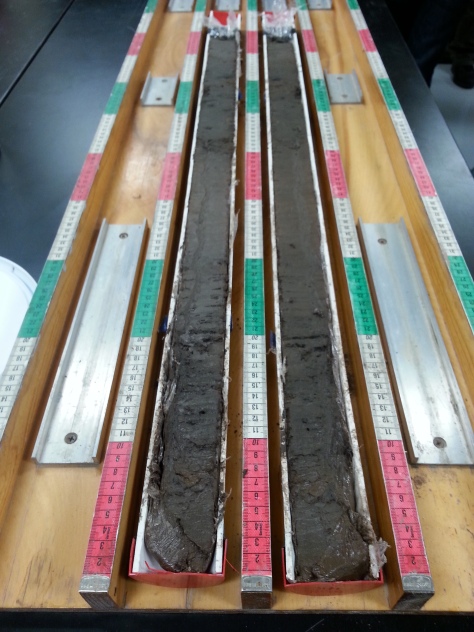 The opened core shows the stratigraphy of the subsurface beneath the lake bottom, giving insight into the evolution of a lake basin.

Found this wonderful article on California’s spring snowcap.  California has been experiencing drought for several years and low snow fall in the mountains will only worsen an already dire situation.  Snowcap in the Sierra Nevada Mountains provide 30% of California’s water and this years reserves are less than a third of their average.